BLOOD IN BLOOD OUT 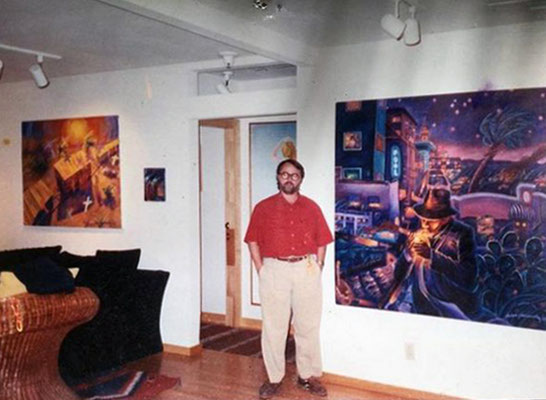 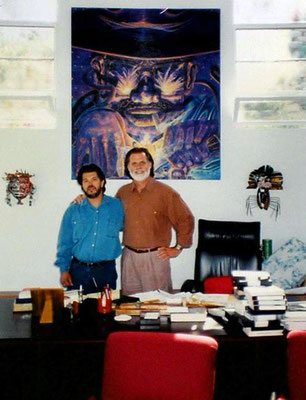 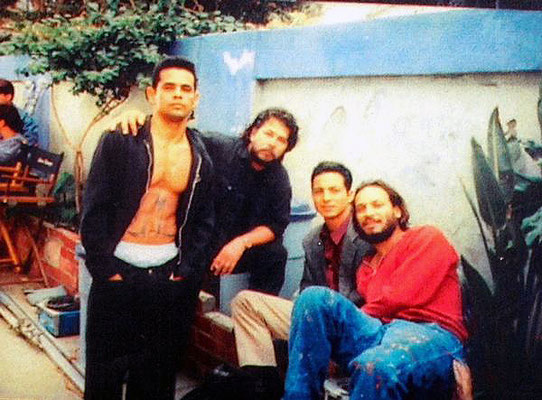 The time was October 1990, and 39-year-old San Antonio artist Adán Hernandez was frustrated with the way his career was unfolding. [...] Hernandez called gallery co-owner Sofia González Pérez one day and told her he was coming downtown to pick up his work, intending to make slides to send to galleries in Los Angeles. She told him to wait because someone in the gallery at that moment was looking at his paintings.

That someone was Bruno Rubeo, a respected Hollywood ﬁlm production designer (Driving Miss Daisy) who was in town scouting locations that could double for East Los Angeles - the setting for Blood In Blood Out, a ﬁlm that would be produced and directed by Taylor Hackford (the director of An Officer and a Gentleman, Ray or Proof Of Life).

The movie's story line revolves around three cousins, one of whom is an artist, and the ﬁlmmakers had also been looking for a painter whose work could be used in the movie. They had scoured Los Angeles without luck, but when Rubeo saw Hernandez`s work, he knew it was exactly right. "Adán is the essence, the spirit of Chicano art”, says the Italian-born Rubeo, describing the electric energy and vibrant hues associated with the genre.

"He is genuine and real, and his paintings are so cinematic. Some of them even  have images that look like a storyboard." Rubeo called Hackford, who was in New York at the time, and told him that he thought he had found their artist. Hackford ﬂew in the next day, took one look at Hernandez's paintings, and was hooked.

Read more about the story at the article BLUES IN THE NIGHT by Oscar Garza from Texas Monthly from September 31, 1991.

An essay of interpretation by Johannes Spiegler 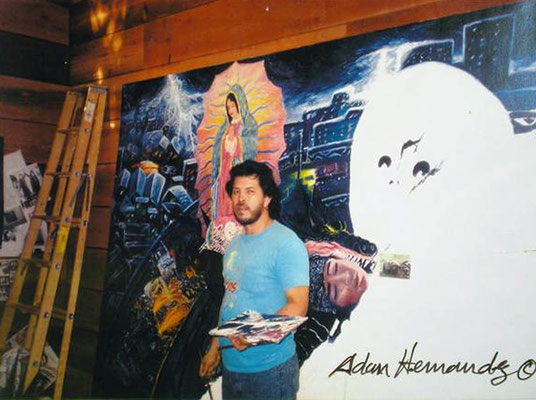 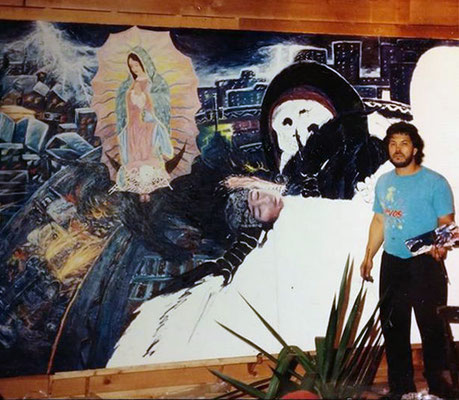 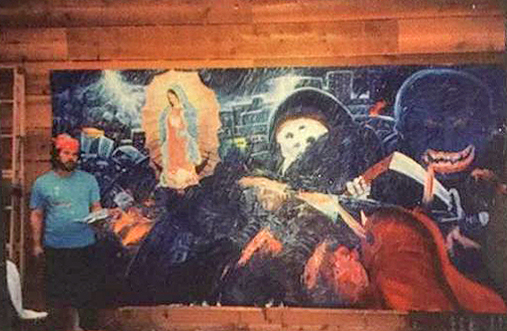 One of the most elaborate and impressive works for BLOOD IN BLOOD OUT was the painting LA MUERTE DE JUANITO (THE DEATH OF JUANITO), a 2 by 5 meters big painting. Adan really worked hard on it for a longer time, which is relativ, while all of his work was created in 2 months (30 pieces).

LA MUERTE DE JUANITO consists of many influences which were part of the movie. There is "Our Lady of Guadalupe" (Spanish: Nuestra Señora de Guadalupe), also known as the "Virgin of Guadalupe", a "grace image" of Maria, the most important mary-sainthood of Mexico, a symbol of the good, forgiveness or hope, but also life itself.

While there is always hope for the good to come, the movie slips into the recipients grave concerns. Adan translated these twists and turns into the most evil visions he was able to create. As we might think that "Juanito" plays a secondary role, that character approves to be the key element, making all the unfoldings possible. His death not only strained the relationship of the 3 main characters, who are some kind of blood-brothers, his death nearly ruined all the relatonships of the families that are connected to each other. The everlasting question accompanies us; why this had happened? How can we continue our life without the little kid? His death reveals the depth of friendship, it´s meaning. But Paco, Miklo and Cruzito also had to ask themselves, what they should do with their lifes. 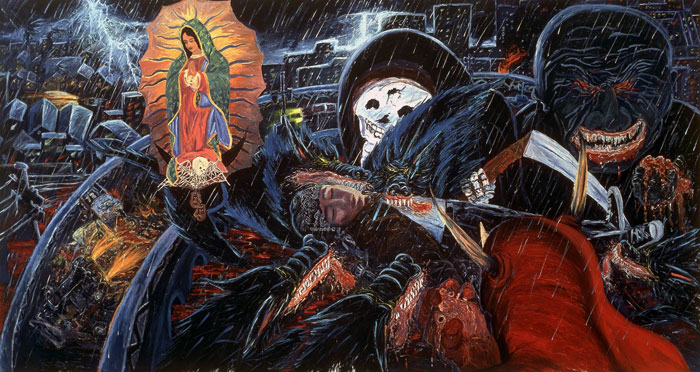 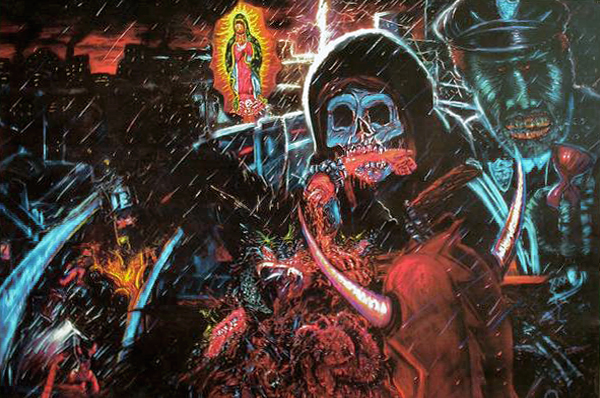 Notice: Adan created another painting of THE DEATH OF JUANITO in 1993.

It is part of the collection of Felipe Vargas (SA, TX).

This dark and aggrieved feeling, which comes up, was Adan´s motivation to build the apparition around the death of Juanito; greedy monsters, demons, an evil spirit, appended by  bloodthirsty wolves, hands that are holding entrails, a city that descends into chaos, with crashed cars, thunder and lightning. There is the death itself, a skeleton, foolish smiling, holding it´s serrated knife. But Adan also plays with symbolics, making it´s meaning not easily accessible to the recipients. It looks like the virgin is standing on a bunch of bones, that holds a human skull and the boxing-gloves of Juanito, while horns are growing out of the bones, building the head of another devil.

Now let´s suppose that the virgin is our hope, and the devil builds the bottom, this bottom is contaminated. Our hope is lost. Anchored in the dark.

Adan has build a masterpiece. 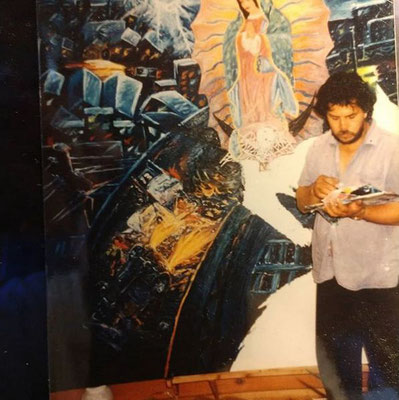 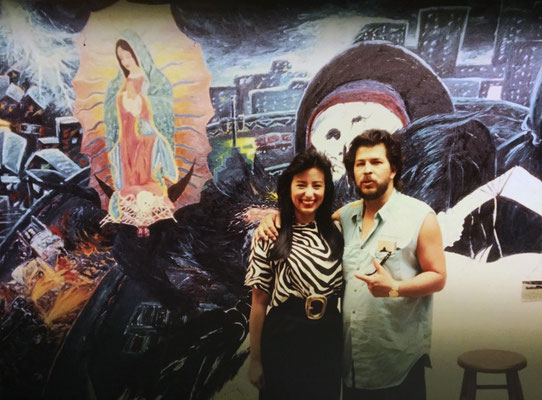 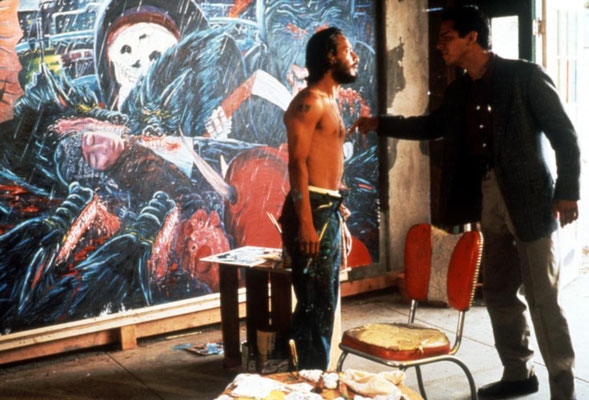 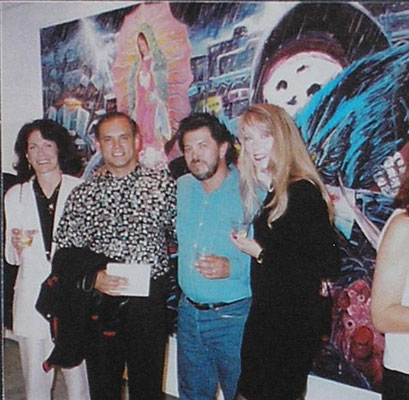 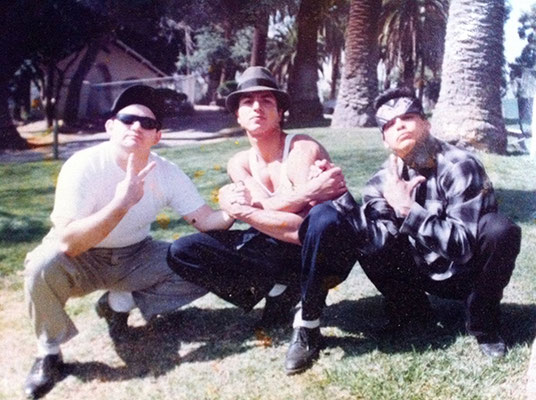 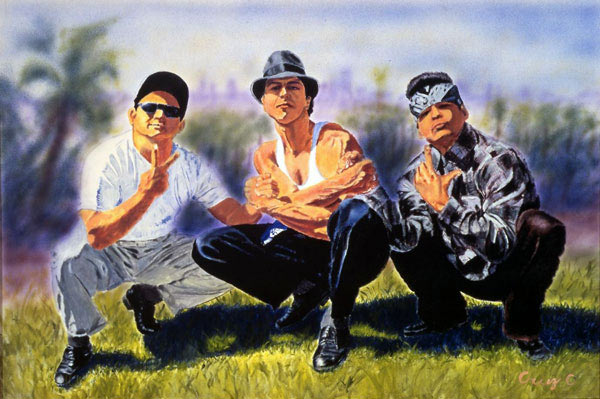 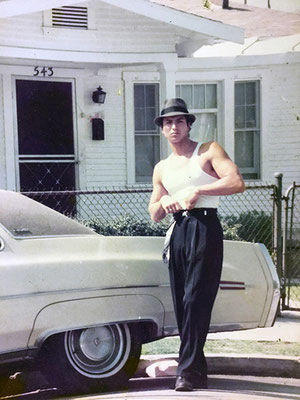 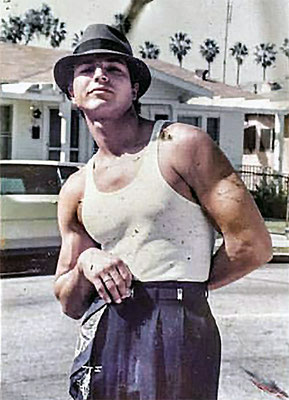 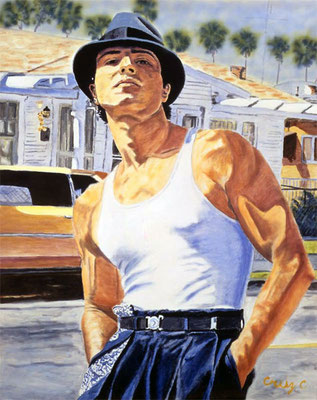 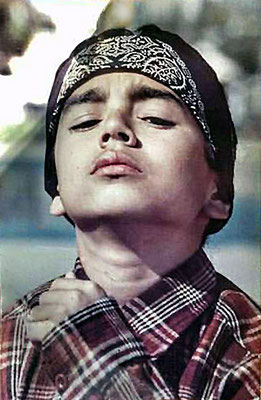 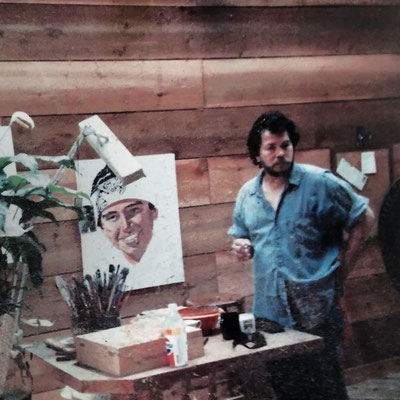 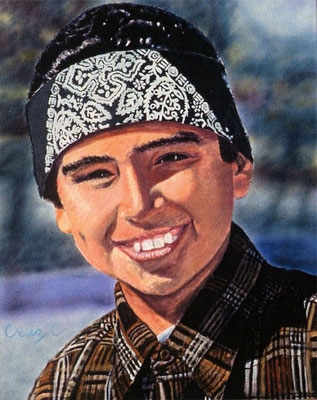 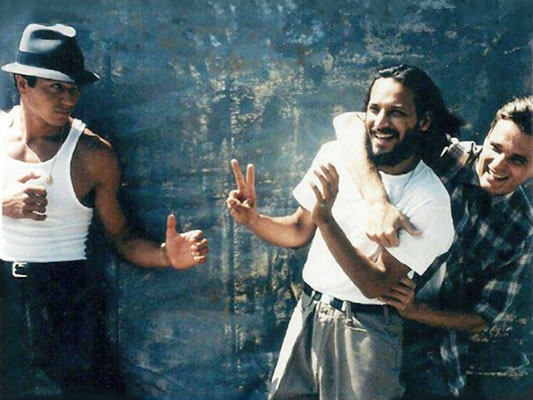 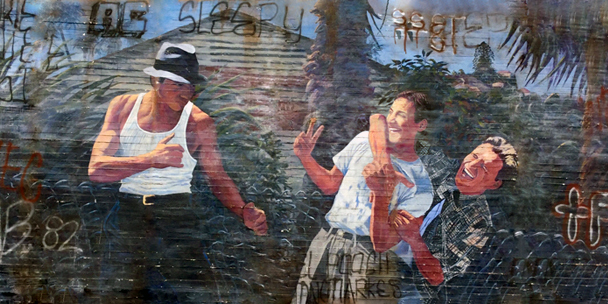 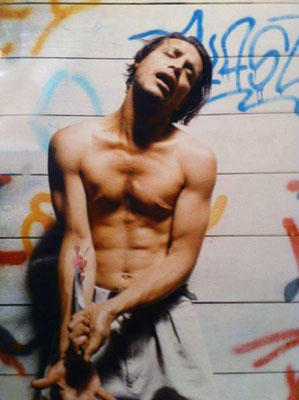 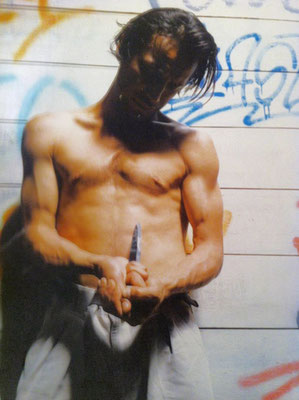 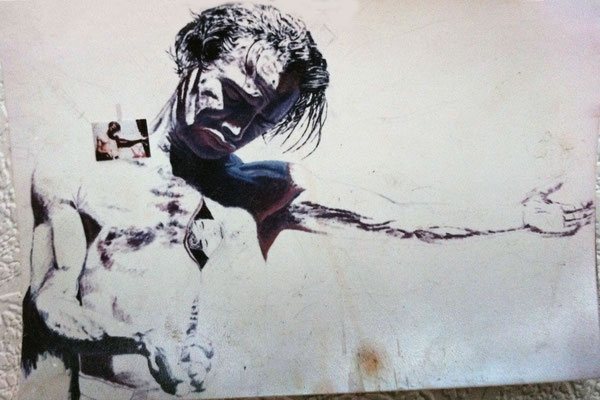 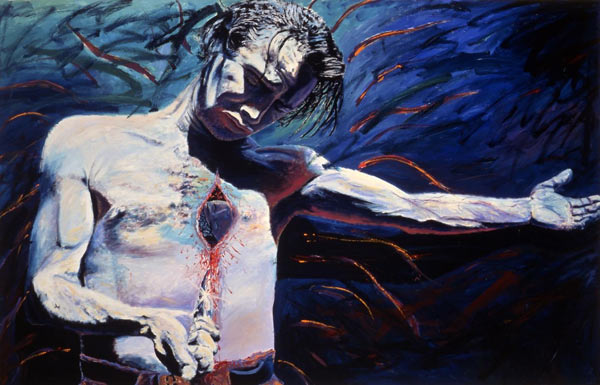